A large, cosmopolitan family, most Mints are perennial or annual herbs, although some woody species do occur (rosemary, lavender, sage, oregano). Laminaceae is easily identified by having four-sided square stems, opposite simple leaves, aromatic oils, and bilabiate leaves.[i] Inflorescences are often spikes or heads at the top of stems, with whorls of small, bilaterally symmetric flowers. Flowers have five petals that have fused over evolutionary time to appear as a five lobed, 2 lipped tube being held by five fused sepals.[ii] Flowers have two to four stamens, and superior four-lobed ovaries that matures into four nutlets.

The Mint family is cosmopolitan with worldwide distribution. With recent changed to phylogenic groups, the Lamiaceae grew in size, now containing 236 genera and approximately 7,200 to 7,500 species.[iii] Many within Lamiaceae hold great economic and cultural significance – sage ( which also form the edible chia seeds), rosemary, lavender, peppermint (and all other mints), thyme, basil, oregano, marjoram, lemon balm, bergamot, coleus, beauty berry shrubs, and even teak are all members of the mint family.[iv]  North America has many native genera that provide food to important pollinators, are the source of aromatic oils, herbal remedies, and foods.

One of the most aggressively spreading invasives found in Willamette Valley Wetland Prairies, Mentha pulegium (Pennyroyal), is part of the mint family. M. pulegium spreads rhizomatically in vernal pools and are particularly difficult to control because of their ability to grow from hard to reach underground vegetation.[v] Native to Europe, North Africa, and the Middle East, M. pulegium emits a spearmint-like smell when leaves are crushed and has been recorded from ancient history to the 20th century as a traditional medicine to regulate menstruation and induce abortions.[vi] Pennyroyal is not recommended for medical use as it has different levels of toxicity depending on level of concentration as well as the person’s age and health who is ingesting it. Pure pennyroyal oil is the most dangerous form of the plant, because it is made up of 80- 90% cyclohexanone pulegone. This chemical is what gives the plant it’s spearmint flavor, but also can cause dizziness, nausea, vomiting and organ failure if ingested in even small amounts.[vii]

Stems: Stem is generally erect and branches emerge oppositely. Stem is square in cross section like all members of the mint family.

Notes: The genus name “Prunella” originates from a German word for “quinsy,” an folk-term for Peritonsillar abscesses, a complication of tonsillitis, for which it was used as a cure.[x] Native Pacific Northwest communities traditionally used this plant for cuts, bruises and, even, heart issues.[xi] Prunella vulgaris var. lanceolata may be confused with a non-native Self Heal (P. vulgaris var. vulgaris), an introduced European plant. They can be differentiated because the invasive variety’s leaves have a 2:1 ratio of length: width, whereas natives have longer, more narrow leaves in a 3:1 ratio.[xii] 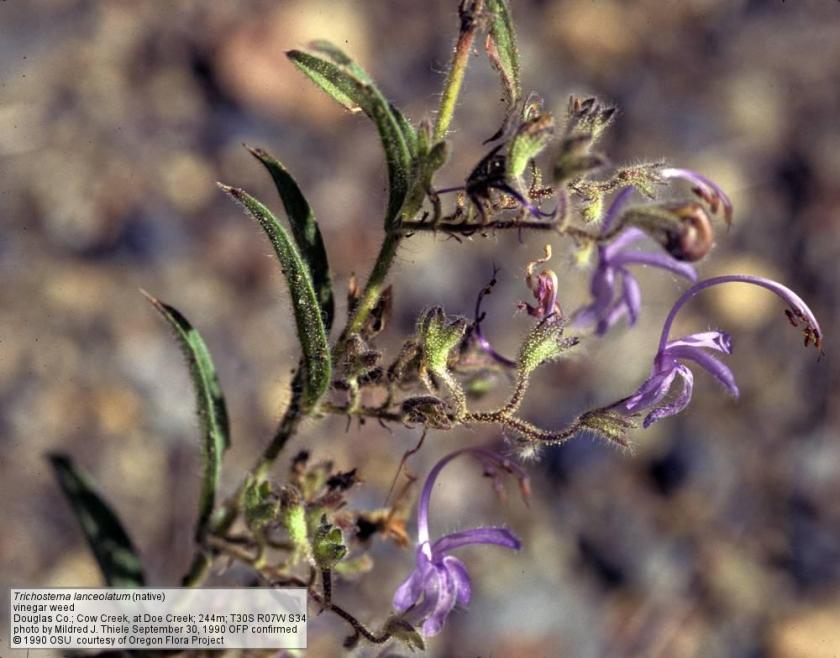 [vi] Pleasant, Barbara. “What You Need to Know about Pennyroyal”. Mother Earth News.