The Asparagaceae combines seven previously recognized families, 114 diverse genera, and approximately 2900 individual species worldwide.[1] Similar to the Amaryllidaceae, until 2003 species now classified as Asparagaceae were found in Liliaceae.[2] Although genetically related, defining physical characteristics across the entire family is challenging. A morphologically diverse family, most members are herbaceous perennials with long, simple, parallel veined leaves forming tight rosettes at the plant’s base or at the end of the stem. Many are geophytes, rooting from bulbs or corms. Flowers are showy and “lily-like,” with identical sepals and petals (tepals), as well as stamens in multiples of three. Ovaries are superior and generally have three compartments that mature into dry capsules.[3] A black pigment, phytomelanin, is present across this family, creating very black colored seed coats.

A wide variety of interesting plants are classified in this family, with many having great economic, horticultural, and cultural significance. Some of the more famous edible family members are asparagus, agave, and yucca. Hostas, hyacinths, muscari, Solomon’s seal (Polygonatum), and snake plants (Sansevieria) are common indoor and outdoor horticultural specimens.

In Willamette Valley wetland prairies, members of the Asparagaceae have some of the most significant cultural importance that, in turn, influenced the area’s natural history. Four key genera are found in wetland prairies – Brodiaea, Camassia, Dichlostemma, and Triteleia – and all four of these produce starchy, nutritious bulbs and corms that were an integral part of Native American diets across the Pacific Northwest.[4] In particular, starchy Camas bulbs was such a vital Kalyapua food staple that entire landscapes were managed so as to encourage their proliferation.[5]

Habit: Showy perennial monocot growing from a round, scaly corm 2 centimeters across [3].

Stems: No true stems. Instead plant has smooth, round scapes ranging from 5 to 25 centimeters tall leading to inflorescence [5].

Flowers: 3 to 11 bell shaped flowers on a loose, umbel-like inflorescence. Dark to pinkish purple flowers have six curved sepals and petals atop 5 to 10 cm long pedicles.[6] The center of the corolla has three white, flattened, pointed staminodes that are about a centimeter in length. Within this whorl are three stamens with, an inferior ovary and a single style.

Notes: May be confused with Crown brodiaea (Brodiaea coronaria) when in flower, or other Brodiaea sp. in leafy stages. B. coronaria has staminoides developing much closer to the stamens with 1 to 5 centimeter long pedicels.[8] This species was harvested for food across the Pacific Northwest and introduced to the United Kingdom as a horticultural species in rock gardens

Stems: Scapes range from about 10 to 30 inches tall and increase in thickness with age.[9]

Flowers: Inflorescence is a raceme of buds arranged in a whirl around the scape. Before opening, the tightly clustered buds almost resemble an asparagus stem. Colorful perianth parts display radial symmetry, with six lanceolate tepals with a purplish blue hue, however sometimes white or occasionally pink (although both are rare). Six bright yellow stamens are shorter than tepals, conspicuous anthers release sticky yellow pollen. Central style supports a three lobed stigma. Ovary superior. After blooming, purple tepals wither and tightly twist together to cover the fruit [4].

Fruits: Elongated, three chambered capsules are full of many shiny black seeds. Overtime, seed capsules go from being a fleshy green to dehydrated, hollowed out compartments that extend away from main stalk.

Notes: May be confused with the dark purple blossoms of Common Camas (C. quamash) which are typically shorter, bloom later, and often have 5 tepals arrayed in the top half of the flower with 1 tepal hanging below – although this last trait is not always a diagnostic morphological characteristic. What is more reliable for identification purposes is that withered C. leichtlinii flowers snugly coil around the emerging seed capsule. Moreover, unlike C. quamash, C. leichtlinii capsules spread out and away from the main stalk.[11] Death Camas (Zigadenus venenosus), though easily differentiated when its raceme of small off white flowers are in bloom, is easily confused during harvest because bulbs of all three species appear so similar.

Leaves: Linear, lanceolate leaves with parallel veins, growing from plant base from a long-lived bulb.

Stems: Range from 4 to 28 inches tall and generally more slender and shorter than C. leichtlinii.[13]

Flowers: Dense inflorescence is comprised of many blossoms attached to the main flower stalk by short pedicels at different levels. Flowers of six tepals are a dramatic pale to deep blue color, and 3 to 5 cm across.[14] Where flower pedicels connect to the main stem, long green bracts are present. Tepals are not fully symmetrical, radiating unequally from the flower’s center. The bottom-most petal is turned downward with the other 5 extending upwards and horizontally around floral reproductive parts. Corolla withers separately and messily around the maturing ovary when it is done flowering. Flowers have six bright yellow stamens and anthers.[15]

Fruits: Short, fat capsules with shimmering black seeds. When mature, Camassia quamash dries and darkens and capsules remain pressed close to the main senesced scape. As one walks through a spent population, dried capsules and many loose seeds let off a dry, snake-like rattle. The tops of capsules rupture when mature, exposing shiny black, teardrop shaped seeds that can be poured out or collected.

Notes: When in flower, C. quamash may be confused with the blossoming Tall Camas (C. leichtlinii). Post-senescence, the dried seed stalks of both plants might also appear identical to the untrained eye. However, it is important to examine the placement of dried seed capsules, with C. quamash capsules staying upright and close to the dried scape. Without aboveground plant parts, bulbs are very similar to both C. leichtlinii as well as the highly poisonous Death Camas (Zigadenus venenosus).[17] 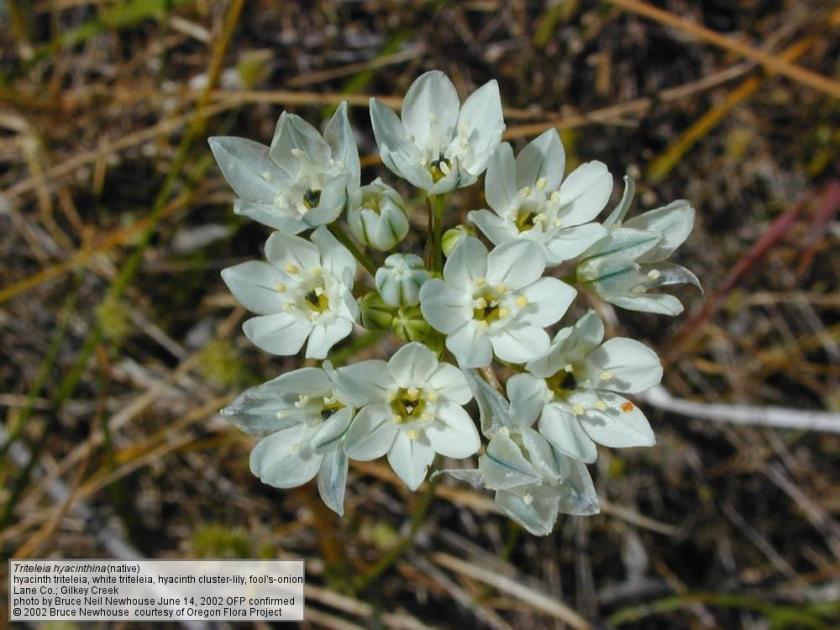