Sizable and diverse, the Brassicas are distributed in cool Mediterranean regions throughout the northern hemisphere. With incredible cultural and economic importance, a wide variety of food crops originate from this family in a wonderful exhibition of divergent evolution. Rapeseed (Brassica napus), radishes (Raphanus), Mustard (Brassica) and horseradish (Armoracia) are all different edible species within this family. Whereas cabbage, cauliflower, broccoli, Brussel sprouts, kale, kohlrabi, and rutabaga are, in fact, actually all the same genus and species (Brassica oleracea) despite astonishing physical differences as human populations have selected for distinctive stem, leaf, and buds throughout history.[i]

Mostly hermaphroditic herbaceous herbs, leaves are lobed simple leaves arranged in a spiraled whorl along the stem. Inflorescences are usually a raceme, but can occasionally be solitary or axillary flowers.[ii] Mustards have easily recognized flowers, with four sepals, and four petals arranged in an “X” or “+” pattern. This cross-like shape was the namesake of the family former label of “Cruciferae.”[iii] Male reproductive parts of consist of six distinct stamens, four long and two short. Depending on the species, superior Brassicaceae ovaries are made up of two united chambers that can mature into two types of specialized capsules. When that fruit is wider than its length, it is known as a silicle. Whereas, a silique, is a mustard fruit is longer than it is wide.[iv] Mustard seed pods vary in shape, but always form a raceme arranged in a whorl along the flower stalk. 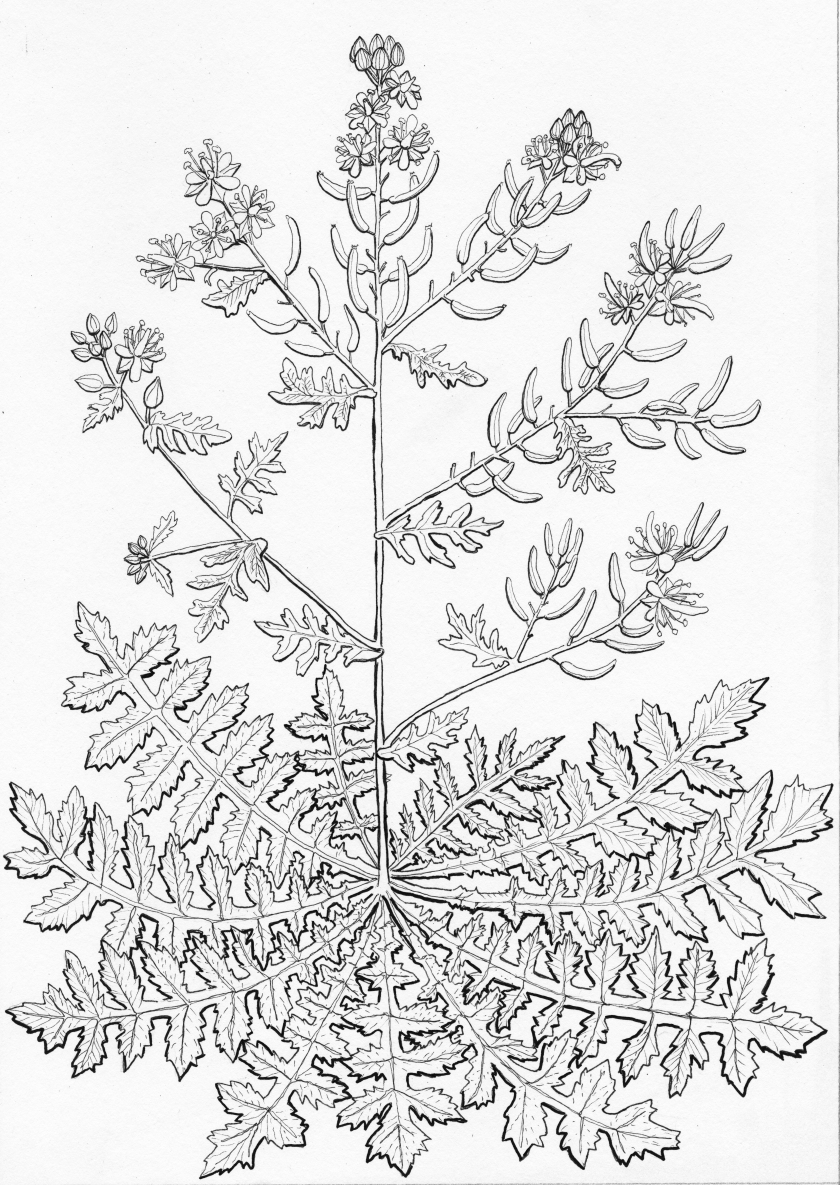 Leaves: Leaves of Rorippa curvisiliqua are highly variable in shape, ranging from 2 to 8 centimeters long. Silhouettes are oblong to oblongly-lanceolate with shallow to deeply cleft pinnate lobes. Lobes can have smooth-edges (entire) or be toothed.[vi]

Stems: Stems can grow upwards or creep along the ground, are diffusely branched from the base, or the plant’s main stem branches near the top.[vii]

Notes: May be confused with Rorippa islandica (northern yellowcress or northern marsh yellowcress), which is a larger member of the mustard family that ranges from 30 to 100 cm in height, with long leaves and larger yellow flowers. The word Rorippa is from the Old Saxon name for this plant: Rorippen, which is derived from the Latin root ‘roro’ meaning “moisture” and ‘ripa’ for riverbank; referring to the wetland habitat that this genus is found in world-wide.[xi]