14,000 years ago, episodic geological, climatological, and hydrological events shaped the Pacific Northwest, carving rock, shifting soils, and laying the foundation for plant life defining the region today.[1] One of the most drastically impacted ecoregions was that of the 150-mile-long Willamette Valley (WV) of western Oregon. Contained by mountains on three sides – the Coast Range to the West, Cascades to the East, and Calapooya Mountains to the South – the Willamette Valley forms the economic and political heart of Oregon. Home to 70% of the State’s total population,[2] the fertile soils of the Valley also comprise 78% of Oregon’s agricultural production (1.2 million acres in total).[3] During the 1820’s, these rich lands were widely publicized nation-wide as a sort of epic promised land for Euro-American colonial settlers and became the Oregon Trail’s destination of choice.[4] 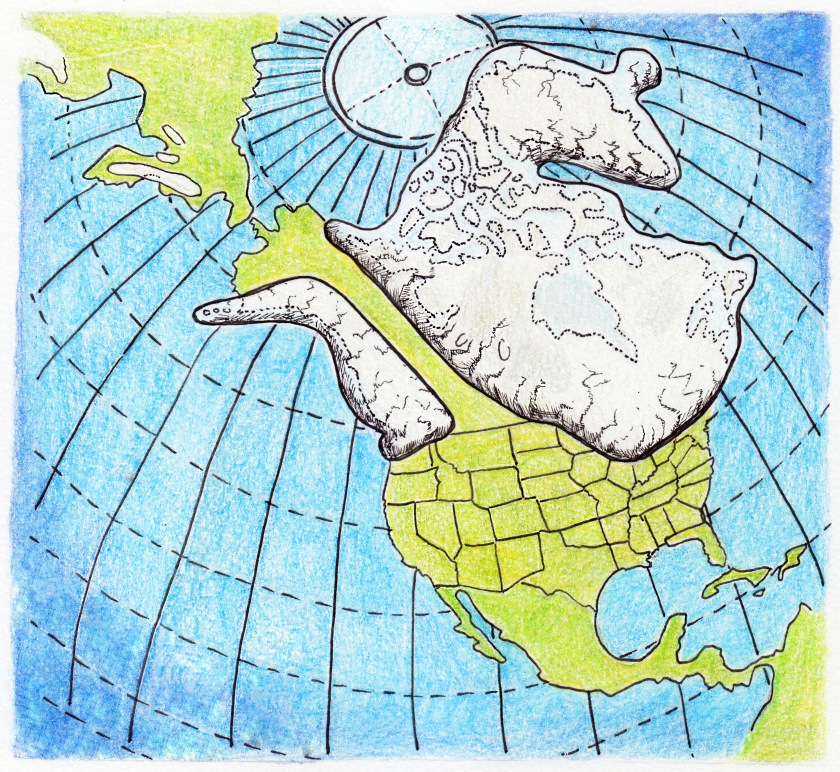 The story of Willamette Valley wetland prairies begins at the end of the last ice age when the massive Cordilleran ice sheet began to melt, recede, and change the world around it. Once covering over 1,550,00 square miles at the Last Glacial Maximum, this sheet covered an area one and a half times larger than what the Antarctic ice sheet measures today.[5]

At the southern-most edge of the Cordilleran ice sheet sat Lake Missoula in modern-day western Montana. As big as Lakes Erie and Ontario combined, this 2,000 foot deep body of water extended 200 miles east into Montana and covered almost 3,000 miles.[6] Lake Missoula developed over time contained by a massive glacial blockade at what is today the Clark River Fork just between today’s Idaho-Montana border. Over time, an incredible volume of water built up behind this 2,500 foot ice dam.[7]

Researchers believe that there were at least 25 major flooding events from this massive body of water breaking through the ice dam at the end of the last glacial maximum.[8]  As climate fluctuated, changing temperatures weakened ice dam’s integrity and increased lake volume as well as pressure causing successive bursting of the dam.[9] 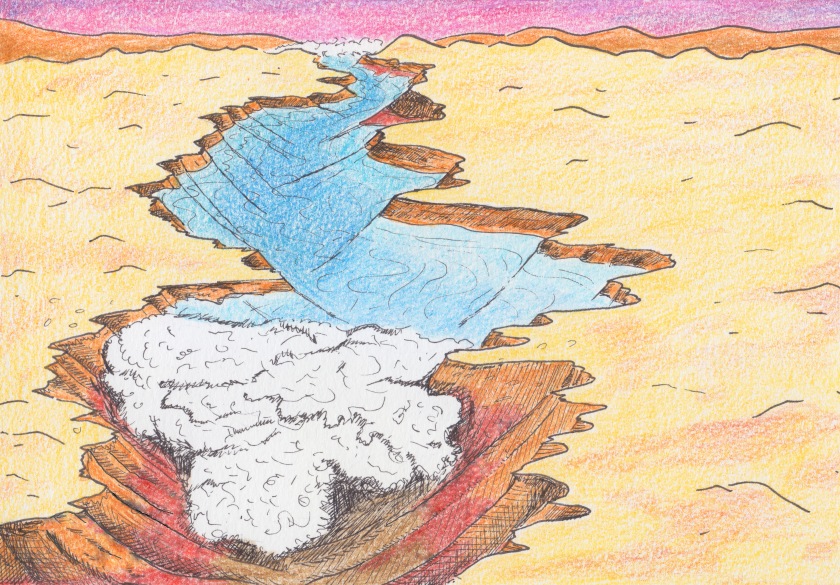 Geologists calculate that during the late Pleistocene, a number of discharges exited Lake Missoula, rushing across northern Idaho and eastern Washington at speeds between 50 to 100 miles per hour.[10] 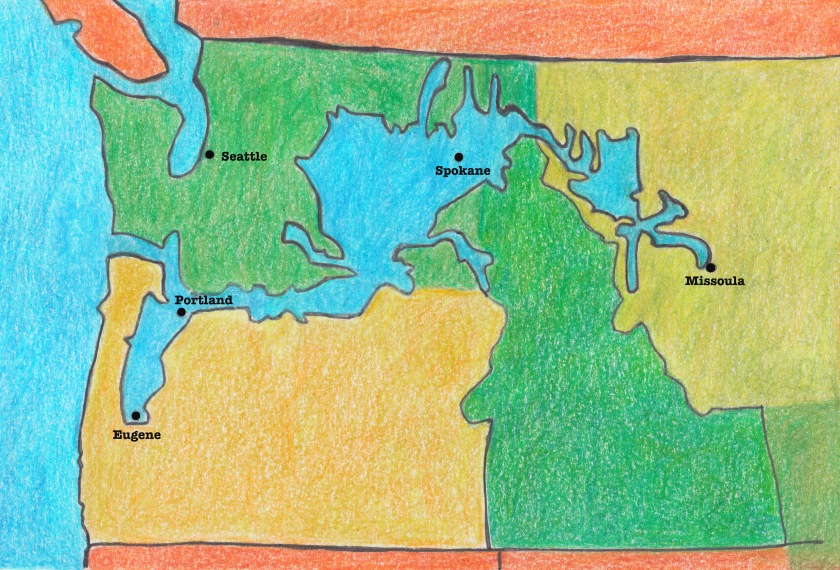 Floodwaters carved a cavernous channel system across Washington State, scouring away topsoil and boulders, depositing much of it into the Willamette Valley before flowing to the Pacific Ocean. This accretion of sediment is the basis of why the Willamette Valley is such a productive, diverse ecoregion, with some parts of the Valley having top soils almost half a mile deep.[11]

Making comparisons to the lush greenery that defines western Oregon and Washington to the bare, moon-like Missoula flood path, in 1928 geologist J. Harlan Bretz poetically described the ecological impact of losing so much soil: “No one with an eye for land forms can cross eastern Washington in daylight without encountering and being impressed by the ‘scabland.’ Like great scars marring the otherwise fair face of the plateau are these elongated tracts of bare, or nearly bare, black rock carved into mazes of buttes and canyons… The scablands are wounds only partially healed great wound in the epidermis of soil with which Nature protects the underlying rock.”[12]

Following the Missoula Floods, an equally dramatic geological event influencing the formation of Willamette Valley wetland prairies was the eruption of Mount Mazama 7,600 years ago.[13] Today known as Crater Lake, Mount Mazama was once a 12,000 foot tall volcano in the Cascade range that was reduced in height by almost a vertical mile through its truly awesome explosion. The eruption filled the surrounding atmosphere with smoke and sediment, spewing ash across western Oregon. Wind currents directed and deposited the vast majority of fine volcanic material north, thickly blanketing the Willamette Valley, forming a layer of dense clay soils.[14] 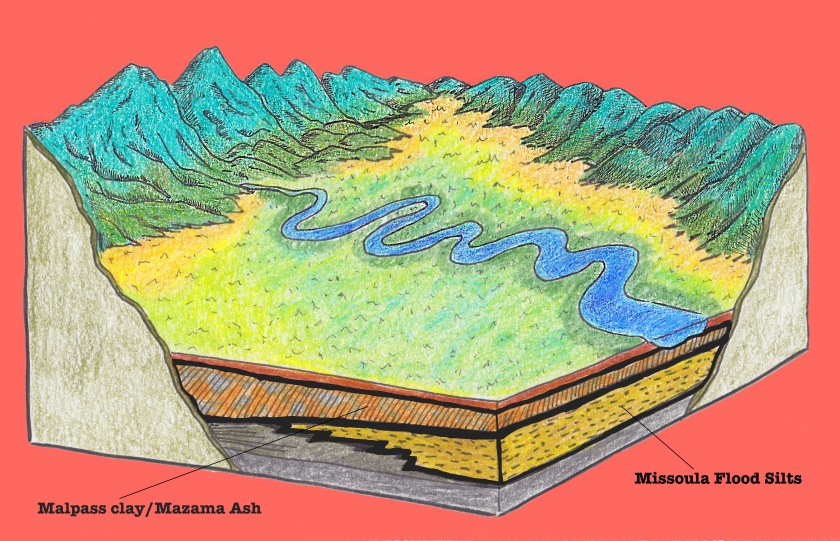 So not only is the Valley’s diverse ecological character derived from ice-age floods and Missoula Flood Silts, but also very much from impermeable Malpass clays originating from Mount Mazama Ash. Thicker in the southern Valley surrounding Eugene, this layer of clay combined with the area’s 46 inches of annual rainfall created a vast amount of annually waterlogged wetlands that are seasonally inundated over winter and extremely dry during Oregon’s hot, Mediterranean summers.

According to historical analysis based on settler journals and US governmental land surveys, in 1850 the Willamette Valley was comprised of a matrix of dry-upland prairies, low elevation wetlands, meandering riparian flood plains, and open savannas dominated by old-growth Oregon White Oak (Quercus garryana).[15] Dense conifer forests that are today considered to be unquestionably characteristic of the area were, in fact, largely relegated to the mountainous outskirts of the Valley.

Willamette Valley wetland prairies are one of the most biologically diverse systems in the Pacific Northwest.[16] For over 10,000 years these habitats, along with oak savanna and upland prairies, were purposefully cultivated and closely managed by the Kalapuya people. Exhibiting just how long humans relied upon these nutrient-rich landscapes, [17] 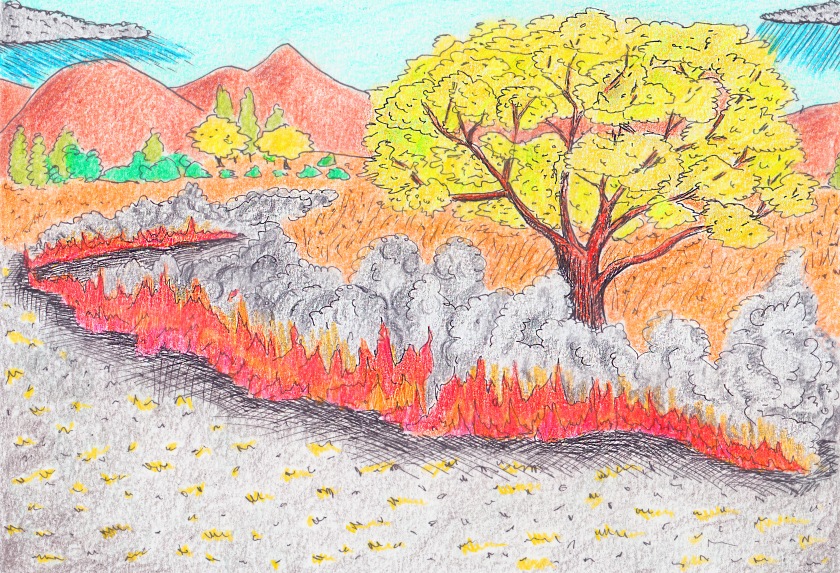 In a Valley where lightning sparked spontaneous combustion can be rare,[18] the Kalapuya developed and utilized complex fire ecology regimes to suppress woody plant encroachment, increase resources for herbaceous species, and maintain habitat for insects, birds, and deer that were also key to Kalapuya diet and culture. In this way, the Kalapuya kept Douglas Fir and Big Leaf Maple from dominating the landscape and fostered the development of diverse ecosystems for thousands of years.

Over the past 150 years the combined forces of development and forced removal of Kalapuya people and their cultural practices, helped to vastly reduce biodiversity throughout the region.[21] Without regular burning, Douglas Fir grew to blanket what seems like every inch of available space. Moreover, the channelization of once complex, meandering rivers, tributaries, and streams drastically altered riparian habitats, surrounding floodplains, and disrupted numerous native hydrological systems from the area.[22] Beginning in 1992, the State of Oregon realized that if they did not act to conserve and restore what was left of local wetland prairies, these habitats would be lost forever.[26] Being home to some of the highest quality remaining wetlands, the City of Eugene became the epicenter of Valley-wide collaborative restoration efforts between government, academic, and non-profit partners.[27] Today the City alone owns and manages over 3,000 acres of urban wetlands that provide the public with fresh water, clean air, wildlife habitat, and outdoor recreation opportunities.

Today a number of conserved remnant and carefully reconstructed wetland prairies pepper the Willamette Valley. These sites are incredibly important to preserving species, creating diverse plant communities, and maintaining habitat for native wildlife. This is all done with the hard work, knowledge, and collaboration of scientists, researchers, and restoration practitioners working in partnership for a greener Oregon. Over the past two decades, stewards developed adaptive management techniques to systematically understand and define best practices in wetland restoration.[28] Such work requires many helping hands and broad botanical knowledge to identify what is or should/should not be growing in restoration sites, remove harmful invasives, and measure project success by maintaining high community diversity over-time. This project aims to educate budding botanists interested in helping these landscapes thrive by cataloguing the many native and introduced species occurring in Willamette Valley Wetland Prairies today.

[1] Burn, M., Sargent, S., Cataclysms on the Columbia: A Layman’s Guide to the Features Produced by the Catastrophic Bretz floods in the Pacific Northwest. Timber Press, Portland, Oregon, 1986.

[7] Burns, M., and. Sargent, S., Cataclysms on the Columbia: a layman’s guide to the features produced by the catastrophic Bretz floods in the Pacific Northwest Timber Press Portland, OR, 1986

[11] Burns, M., Sargent, S., Cataclysms on the Columbia: a layman’s guide to the features produced by the catastrophic Bretz floods in the Pacific Northwest. Timber Press, Portland, OR, 1986.

[19] Mackey, Harold. The Kalapuyans: A Sourcebook on the Indians of the Willamette Valley. Salem: Mission Mill Museum Association, 1974.

It seems we can’t find what you’re looking for. Perhaps searching can help.